This week, Smashwords is hosting its annual Read an Ebook Week promotion. Two of my books are available for fifty percent off as part of the event.

Revolution of Air and Rust is set during an alternate 1915, where Teddy Roosevelt is building an empire and only Pancho Villa stands in his way. The American Expeditionary Force under the command of General “Black Jack” Pershing has invaded Northern Mexico. Pancho Villa leads his revolutionary army in a desperate raid against the American force only to be outflanked. Just as Pershing’s airships prepare to deliver the death blow, Pancho Villa is transported to a parallel Earth where he finds an unexpected ally and the technology that might just turn defeat into victory.

Revolution of Air and Rust is a stand-alone novella set in the Empires of Steam and Rust world created by Robert E. Vardeman and Stephen D. Sullivan. A story filled with military action, espionage and gadgetry that’s sure to satisfy fans of steampunk and alternate history. The book is available for half off until March 8 at http://www.smashwords.com/books/view/254622. Remember to use the code REW50 on checkout. 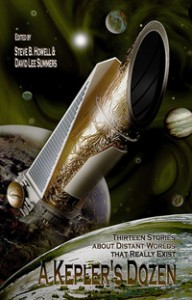 A Kepler’s Dozen is an anthology of action-packed, mysterious, and humorous stories all based on real planets discovered by the NASA Kepler mission. Steve B. Howell, project scientist for the Kepler mission, and I both co-edited the anthology and contributed stories. Whether on a prison colony, in a fast escape from the authorities, or encircling a binary star, thirteen exoplanet stories written by authors such as Mike Brotherton, Laura Givens, and J Alan Erwine will amuse, frighten, and intrigue you while you share fantasy adventures among Kepler’s real-life planets. The book is available for half off until March 8 at: http://www.smashwords.com/books/view/325583. Again, remember to use the discount code REW50 to take advantage of the sale!