When I graduated from high school, my mom bought me an 8-inch Celestron Telescope. To this day, I treasure that telescope and the journeys it’s allowed me to take. I’ve looked at planets, galaxies, and star clusters with the telescope. In my early years of college, when I spent summers working at Cal State San Bernardino, Professor Paul Heckert loaned me a photometer and I even took variable star data with the telescope that we published. However, one thing I’ve always wanted was have a camera to take photos and share. My wife remedied that this past Christmas when she bought me a little Orion StarShoot USB Eyepiece Camera. Unfortunately, the weather has been sufficiently poor since Christmas, I didn’t get a chance to try it out until a little over a week ago. Here I am in my back yard in New Mexico, pointing the telescope at Jupiter. 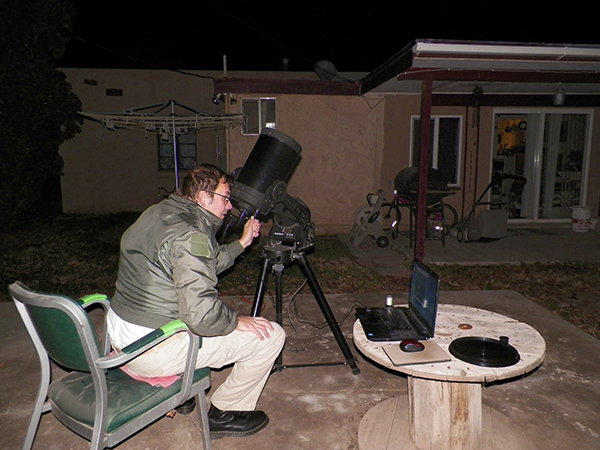 For my first time out, I was able to get images of both Jupiter and Saturn. The camera works by taking video. Afterwards, the individual video frames may be combined using stacking software. My telescope doesn’t track perfectly. Also, the atmosphere shimmers and dances, especially when you point down near the horizon where Saturn was. This shimmering and dancing is called seeing and the stacking software attempts to take out the effects of poor seeing. My first target was Jupiter. On the left, you see Jupiter. The little bump on the left of the image is its moon Ganymede. The planet has a distinctly reddish cast because I used a red filter to try to cut down the brightness and help me see features on the planet better. The image on the right is saved as grayscale with the contrast turned up. I was amazed at how much detail I could see in the cloud features.

Next, I turned the telescope toward the horizon to catch Saturn. The ringed planet is in a great position right now with it’s rings tilted so they’re easily visible. The image below is at the same scale as the Jupiter images. As you can see, Saturn appears much smaller both because it is smaller than Jupiter and also because it’s farther away. I took a longer video sequence. Most of the images looked terrible and I didn’t think I got a very good image, but when I stacked them, I was amazed at how much detail I could see. I can see the shadow of the planet itself on the rings. I can see the Cassini division in the rings and even a feature in the clouds. Given the poor conditions, I’m very pleased with this image.

Sitting behind the telescope is perhaps the closest I’ll get to exploring the solar system, but I hope we’ll send people to take a closer look. I imagined such a voyage in my novel The Solar Sea. Sitting behind the telescope, I find myself thinking about flying through Jupiter’s clouds or standing on the surface of Titan and seeing Saturn’s rings looming large above me.

If I can manage some clear skies, I hope to try Mars next. I’ve always wanted to climb Olympus Mons, the tallest mountain in the solar system and admire the view from the rim of Valles Marineres, the solar system’s longest canyon. If I get some good Mars pictures, I’ll be sure to share them here.

8 comments on “Exploring the Solar System from My Back Yard”