In recent posts, I’ve been talking about my Clockwork Legion story “Fountains of Blood” which will appear in the anthology Straight Outta Tombstone coming from Baen Books. At last, I can reveal the book cover and the table of contents. I am honored and thrilled to share the table of contents with so many people whose work I admire and feel privileged that many of them are friends. 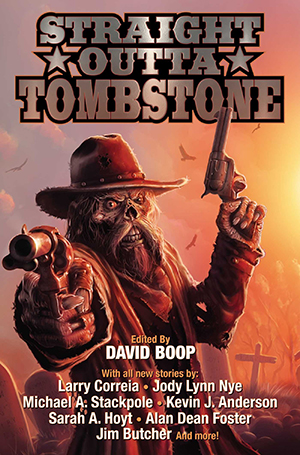 Tales of the Weird Wild West. Top authors take on the classic western, with a weird twist. Includes new stories by Larry Correia and Jim Butcher!

Come visit the Old West, the land where gang initiations, ride-by shootings and territory disputes got their start. But these tales aren’t the ones your grandpappy spun around a campfire, unless he spoke of soul-sucking ghosts, steam-powered demons and wayward aliens.

Here then are seventeen stories that breathe new life in the Old West. Among them: Larry Correia explores the roots of his best-selling Monster Hunter International series in “Bubba Shackleford’s Professional Monster Killers.” Jim Butcher reveals the origin of one of the Dresden Files’ most popular characters in “Fistful of Warlock.” And Kevin J. Anderson’s Dan Shamble, Zombie P.I., finds himself in a showdown in “High Midnight.” Plus stories from Alan Dean Foster, Sarah A. Hoyt, Jody Lynn Nye, Michael A. Stackpole, and many more.

Here’s the full table of contents for the book:

I hope you’ll ride into the weird wild west with us this summer. You can pre-order the book right now from Amazon.com and it will ship to you as soon as it’s available in July.