In 1993, one of my co-workers at Kitt Peak National Observatory introduced me to the Vampire Chronicles of Anne Rice. At that point there were just four volumes in the series. I picked up a set and read straight through them. I loved the way her vampires were able to travel leisurely through history and see things in our modern world with wonder and passion. An example is the way 17th century French vampire Lestat de Lioncourt discovers rock and roll, makes it his own, and wakes the Queen of the Damned herself. This long view of history appealed to me both because of my inherent love of history and my love of science fiction. After all, that’s much of what science fiction is about, looking back at history, understanding how people and technologies change, and then projecting those changes into possible futures. Thanks in part to Anne Rice, I would try my own hand at vampire fiction, gave it a science fictional twist and Vampires of the Scarlet Order was born.

I’ve continued to follow the Vampire Chronicles over the years and it feels like a circle of sorts has been completed with her latest entry in the series. 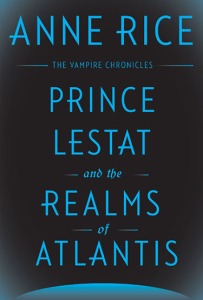 As Prince Lestat and the Realms of Atlantis opens, we learn that a vampire named Roland has captured a strange, human-looking creature. He can drink all the creature’s blood, which is more satisfying than even human blood, and the creature will appear to die. Despite this, the creature will awaken soon after, its blood regenerated. Roland shows this creature to the ancient and powerful Rhoshamandes, who has fallen out of favor with the vampire court led by Prince Lestat. Roland suggests the creature can be used as a tool for Rhoshamandes to regain power.

Meanwhile, in another part of the world, another creature hears a familiar name in the radio broadcasts of the vampires. When he attempts to confront vampire Benji Mamoud who hosts the broadcast, vampires confront him and corner him. The creature then dispatches the two vampires. While all this is going on, Prince Lestat, back at the vampire court, has started having dreams of a great city that fell into the sea. Lestat has become prince of the vampires by becoming the host of Amel, the spirit responsible for the existence of the vampires in the first place.

From the title, it should come as no surprise that Lestat ultimately discovers a connection between the strange creatures, the spirit Amel, and the lost city of Atlantis. Like the vampires, the new creatures, who call themselves Replimoids, have aspects that are both likeable and frightening. This story of the Replimoids and Atlantis is the reason I feel like I completed a circle. The series that led me to my science fictional take on vampires has now taken its own science fictional turn. There’s a simplicity and almost innocence to Rice’s visions of advanced civilizations and their constructs that reminds me of the science fiction from the 1950s and 60s. This might be a little surprising for people used to contemporary SF, or used to some of the dark historical realities presented in the earlier Vampire Chronicles, but it mostly works in the context of the story.

Like the previous entry in the Vampire Chronicles, Prince Lestat, Rice tells the story from multiple points of view and we get to spend time with several of the vampires she’s introduced over the course of the series. In one of my favorite chapters, Lestat meets his old friend Louis de Pointe du Lac in New Orleans. I had fun following their walk through familiar French Quarter landmarks such as Cafe du Monde, Jackson Square, and Pirates Alley. As a long-time fan, this was all great fun, but I could imagine the stream of characters being a little overwhelming for a new reader.

As a fan of the Vampire Chronicles, I enjoyed spending time with Lestat, Louis, Marius, Benji, Gabrielle and the others again. I found this an interesting turn in the story and would be delighted to follow the vampires into another adventure. For people new to the Chronicles, I would suggest they start with the early volumes such as Interview with the Vampire or The Vampire Lestat and read through at least Queen of the Damned before diving into this latest volume.

2 comments on “Prince Lestat and the Realms of Atlantis”