An all too frequent lament I hear these days is that Hollywood is too obsessed with superhero blockbuster movies and remakes. They can’t seem to make anything original. 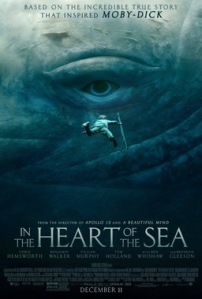 A couple of weeks ago, I was surprised to discover a recent historical film called In the Heart of the Sea directed by Ron Howard (Apollo 13 among others) and starring such bankable stars as Chris Hemsworth (Thor), Tom Holland (Spiderman Homecoming), and Benjamin Walker (Abraham Lincoln, Vampire Slayer). The movie tells the story of the Essex, an early nineteenth century Nantucket whaler whose story went on to inspire Herman Melville to write Moby-Dick. What was surprising to me was that I’d heard nothing about this film until I saw a preview for it in front of a superhero movie I was watching with my kids.

I am a big fan of Herman Melville’s magnum opus. I first read the novel in high school and had a difficult time understanding it. I was also disappointed to discover that the version I bought was an abridged version. After I met Ray Bradbury in 1983 and learned he’d written the screenplay for the 1956 film starring Gregory Peck, I vowed to give the novel another try. I sought out a copy of the unabridged novel and dived in. I read it in college and loved not just the main story, but all the diversions Melville took to tell us about aspects of whaling. I felt they helped me understand the plot much better.

Not long after I read the novel, I ended up taking a job on Nantucket, working at a small observatory. I got to visit the whaling museum there and experience the town that gave rise to an important part of early nineteenth century Americana. It’s fair to say Moby-Dick worked its way into my very bones. Parts of which strongly influenced my novels Children of the Old Stars and Heirs of the New Earth.

In fact, my first professional sale was a retelling of Moby-Dick in which the crew of an airship hunts dragons for the fuel that allows them to breath fire. It was published in Realms of Fantasy magazine in 2001 and is now available in a standalone reprint edition at Amazon, Barnes and Noble, and Smashwords.

Perhaps after all this, it comes as no surprise that I loved In the Heart of the Sea. It told the story of men hunting whales from little wooden boats, using hand-thrown harpoons. In the story, we already see that whales are becoming over-hunted and hard to find. This drives the crew of the Essex to attempt to hunt whales out on the open ocean where they find one angry whale that has grown large and isn’t going to put up with this hunting nonsense any longer.

I found it a powerful movie, well told. It was both exciting and thoughtful, which seems a rare combination in movies these days. It endeavored to be faithful to history. Sadly, the big name blockbuster stars didn’t really shine in this film, and it would seem they didn’t draw much of an audience, either. Reviewer Matthew Lickona of the San Diego Reader said the movie had “a strange decency and politeness for a film that strives to depict, in epic form, man’s dark and visceral struggle with the world and himself.” The thing is, that’s actually one of the things I find compelling about history is that often times people found ways to be polite and decent in the heart of darkness.

If you like good, historical fiction, I would recommend In the Heart of the Sea. It’s not an amazing film, but it is a good one, and a good change of pace from yet another superhero film. It gives me hope that I might find a few more good films out there, lurking under the surface.

4 comments on “In the Heart of the Sea”