This past weekend I saw Deadpool 2 with my daughter. I enjoyed the film and particularly its theme of seeking out love and family in the wake of violence and chaos. It’s funny with a lot of self-aware, and sometimes inappropriate, humor. It also left me pondering Hollywood’s current obsession with superheroes. I sometimes feel like I suffer something I call “superhero fatigue.” Sort of a groan that escapes involuntarily when I see another new superhero film announced. Yet, I do go back to some that particularly grab my eye. Films like Logan, Wonder Woman, and Deadpool have engaged me in spite of my fatigue.

I loved superheroes as a kid, both from comic books and on television. 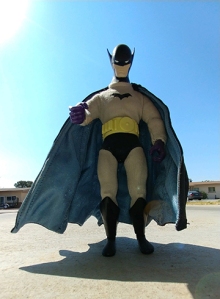 I probably discovered them on television first through such shows as Filmation’s Superman/Aquaman Hour of Adventure and the famous Batman television series starring Adam West and Burt Ward. Discovering my friends from TV in comic book form no doubt helped me improve my reading. Because of when my birthday fell, I was only four when I started Kindergarten. I was younger than most of my classmates and smaller. My size probably wasn’t helped by my mom smoking while she was pregnant with me. As such, I have the familiar story of being the small kid picked on relentlessly by his classmates. I know I loved superheroes because I loved to imagine myself having super powers and impressing the other kids in class. Of course, super powers would also have given me the ability to beat up the worst of the bullies.

As an adult and a writer, I see superheroes in a different light. I’ve come to recognize that all good superheroes have limits or weaknesses and the best stories are when the villain pushes past those limits and weaknesses. All the best superheroes have people they love and they can be hurt when the people around them are hurt. That’s how Deadpool 2 starts.

As an adult, there are still dangerous forces I sometimes feel powerless to stop, such as climate change, poverty, and overblown man-children with nuclear arms who like to taunt each other through social media. Because of that, there’s still appeal in wondering whether I could do something about them if I had superpowers. Yet, it’s often the more mundane, day-to-day challenges that cause the most anxiety. Will my daughter be safe at school? How can I afford that bill I forgot about? Where did that bad Amazon review come from? Did they even read the book I wrote? Even if I had superpowers, those things probably wouldn’t change. I have to work through my limitations to find solutions to those things. I have to teach my daughter to be aware of possible dangers and avoid them when possible. I maybe have to sacrifice something for that bill, or reevaluate my finances. I should be brave like a superhero and look at that review and see whether or not there’s something I can learn from it.

The closest thing I’ve ever written to superhero fiction is Vampires of the Scarlet Order about a team of vampire mercenaries who must save humanity from itself. Can vampires be superheroes? Just ask Marvel’s Blade, who was brilliantly portrayed a few years ago by Wesley Snipes. As it turns out, I first learned about Blade when Neal Asher compared my book to Marvel’s movie and comic book series. My vampires have great power. They can move fast and have great strength. They’re hunters, but they have limits. Among other things, they can only work at night and they can be destroyed. As with the heroes in Deadpool 2, they also find family in unexpected places. If you care to see my take on superheroes, visit http://www.davidleesummers.com/VSO.html to learn more.