I’m currently working on the final chapters of my collection Firebrandt’s Legacy. This book collects space pirate stories that have appeared in numerous anthologies over the years alongside several new stories. The whole collection is an arc of related stories, so the book may be read as an episodic novel. I’ve been sharing the new and revised stories with my Patreon subscribers since September 2017.

Based on my current outline, I have about three stories to go to bring events up to the beginning of my novel The Pirates of Sufiro and to bring the collection up to the length I want. I will release the first story of the final three to my Patreon subscribers on Thursday, July 26.

My approach to Patreon has been pretty simple. I only have one tier and it only costs $1.00 per month to subscribe. Of course, patrons are welcome to pay more per month if they feel sufficiently moved by my work to support me at a higher level. My first goal is to use this money to pay the costs associated with publishing Firebrandt’s Legacy. My second goal is to print new editions of the other related books including The Pirates of Sufiro, Children of the Old Stars, and Heirs of the New Earth. Patreon support has already helped me publish the new edition of The Solar Sea, which is a prequel to my Space Pirates’ Legacy series that tells the story of how humans became a space faring society. I shared a free download of the ebook with all my Patreon subscribers. Patreon support also helps support this blog and helps support my travel to conventions where I give both writing and science presentations.

For the duration of Firebrandt’s Legacy, I have been posting at least one new or revised story to the site per month along with a “Behind the Scenes” look at where the story first appeared (if it had been previously published) and what influenced me to write the story. Of course, I plan to share a free download of the complete ebook to all my Patreon subscribers when it’s complete.

Now that I’m about to finish Firebrandt’s Legacy, I’m thinking about the best way to share my progress revising The Pirates of Sufiro for a new edition. I expect that I’ll be heavily revising this novel for a number of reasons. Not the least of which is that this was my very first novel and I’ve learned a lot since I first published it. I’ve also received a lot of feedback on the novel over the years and plan to take those comments into account. Sharing “reedited chapters” may not sound like much value to anyone who has already read the book and people may wonder why they should subscribe instead of just buying a cheap used copy of the book.

My current plan is that when I start The Pirates of Sufiro, instead of doing the “Behind the Scenes” segments, I’ll share the chapter as it appeared in the most recent edition, perhaps along with some notes about the inspirations and the origins of the ideas. I’ll wait a couple of weeks, then present the revised chapter, so people can see what I’m doing with this edit. In both cases, I’m delighted for people to comment on what I’m doing as the project progresses.

To prepare for this transition, I’ve recorded a brief intro video and posted it to my Patreon site. Also, I have made two of the Firebrandt’s Legacy stories/chapters available for anyone to read whether or not they’re a patron. They’re the first chapter, “For a Job Well Done”, and Chapter Twelve, “Calamari Rodeo.” I encourage you to drop over to the site, watch the intro video and read the two free stories. If you like these characters, please sign on as a patron. My Patreon site is: http://www.patreon.com/davidleesummers 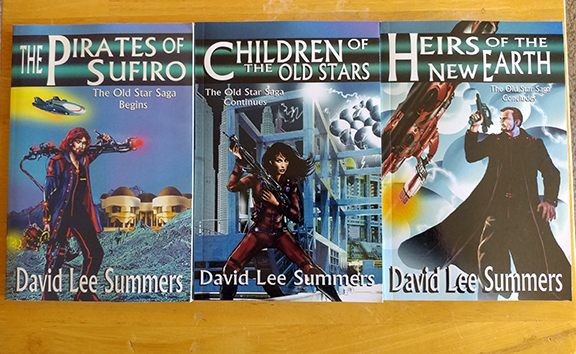 One last thing before signing off. Speaking of used copies of The Pirates of Sufiro, Children of the Old Stars, and Heirs of the New Earth, Hadrosaur Productions is running an auction at eBay for the last complete set of the LBF/Hadrosaur editions of the Old Star Saga in their stock. Drop by and place a bid at eBay!