This has been another week helping to install the Dark Energy Spectrographic Instrument or DESI at the Mayall 4-meter telescope at Kitt Peak. In short, the goal of DESI is to study the effect of dark energy on the expansion of the universe. We plan to collect spectra of tens of billions of galaxies and quasars with the goal of making a three-dimensional map of the universe out to about 11 billion light years. You can read more about the DESI project at https://www.desi.lbl.gov/

The DESI project is spearheaded by Lawrence Berkeley Lab in California and being installed at Kitt Peak in Arizona. 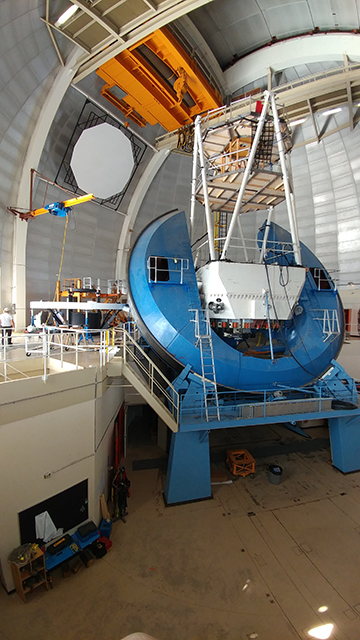 However, it really represents a worldwide collaboration. There are scientists working on this project from England, France, Spain, Italy, South Korea, China, France, Canada, Colombia, Australia, and others plus numerous institutions within the United States. All of these agencies are not only contributing expertise, but actually building components that will go into the finished instrument.

In an earlier post, I spoke about how we worked to remove the Mayall telescope’s original top end. The top end originally housed both a secondary mirror and a prime focus camera. Both of these have been used to make groundbreaking discoveries over the last five decades. The Mayall was the telescope Vera Rubin used to study rotation curves of galaxies, which led to the discovery of dark matter. I’ve helped with observations that have led to the confirmation of numerous exoplanets. We’re now replacing the telescope’s original top end with a new one that will hold 5000 fibers at prime focus. Each of those fibers will run to spectrographs that will break up the light from objects in the sky so it may be analyzed and the position of the object can be measured. In the photo above, you can see the new top end being assembled to the left of the telescope.

To get light from the sky onto the fibers, the telescope will collect it with the primary mirror. That sits in the big white structure at the center of the big blue horseshoe-like structure in the photo above. The mirror will direct that light to the top end. Because the mirror is curved, allowing the light to be collected and redirected, it means the focus changes across the field of view. 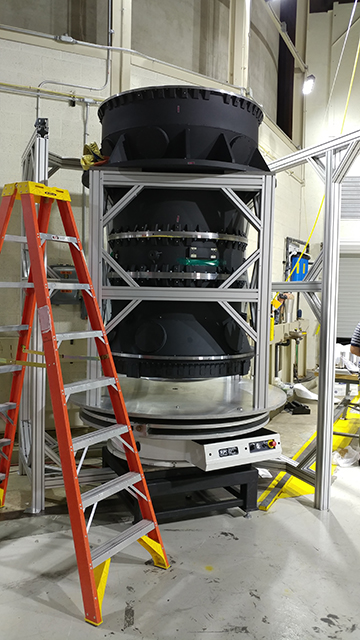 To deal with that, you need to put some lenses in front of the fibers, sort of like glasses. Another real world problem of telescopes is that as you point toward the horizon, light gets spread out. So you need optics to compensate for where you’re pointing in the sky. Sort of like glasses that automatically adjust themselves for where you’re looking.

Scientists from England assembled those specialized “glasses” for the telescope. Those arrived last week and I was on hand during their assembly at Kitt Peak. You see those assembled optics in the lower photo. Scientists from Italy built the “Hexapod” pointing system, which keeps those optics aligned. That arrived and was tested about a month ago. Scientists from Fermilab in Chicago are responsible for integrating those systems and putting them together in the top end ring. That process will start next week. It’s all quite a puzzle and it’s been remarkable to see it all come together. It’ll be even more amazing to see what science it yields.

Of course, work at Kitt Peak helps to inspire my science fiction. As a reminder, this is the last weekend of the Smashwords Summer/Winter sale. You can learn about my science fiction books that are on sale at:

We also have fantasy and steampunk titles on sale. You can learn about them at: