Last month, Robert E. Vardeman mentioned that he’s a fan of the Ray Harryhausen film The Valley of Gwangi in a post on his Patreon site. A couple of weeks later, when I was on a panel discussing Weird Westerns with Jeff Mariotte at the virtual CoKoCon, the film came up again. Although I had been aware of the film and had seen clips, I’d never watched the whole thing before, so I took this as a sign that I should finally sit down and watch it.

The film starts off looking like it’ll be a pretty ordinary western. T.J. Breckinridge runs a struggling rodeo on tour through Mexico in the early 20th century. Her former boyfriend, Tuck Kirby, wants to buy her out, but she doesn’t want to sell. T.J. has an ace up her sleeve. Gypsies brought her a tiny horse from Forbidden Valley and she expects it will be a great attraction. A paleontologist named Horace Bromley, recognizes the animal as no ordinary horse. He declares it’s the prehistoric horse, Eohippus. The leader of the gypsies say the little horse is cursed and convince Bromley to capture the horse and return it to Forbidden Valley. Bromley, of course, is interested to see what other creatures might live there. To get the horse, the gypsies have to knock out one of T.J.’s men, Carlos.

Tuck sees the gypsies leaving and discovers they’ve taken the Eohippus. He sets out after them. Unfortunately, Carlos saw Tuck and thinks he’s responsible for the theft. T.J., Carlos, and several of the rodeo riders set out after Tuck. They all soon arrive just outside the Forbidden Valley. After sorting out what’s going on, Tuck nearly recaptures the Eohippus, only to have it disappear into a cave in the cliff face. T.J., Tuck, Horace, and the rodeo riders set out after it. It turns out the Eohippus didn’t go into a cave, but entered a passageway leading to the Forbidden Valley. The rodeo men clear out some rocks and soon our band goes riding into the valley.

Once in the valley, our heroes discover that Eohippus isn’t the only prehistoric creature living there. They’re soon attacked by a pteranodon. After dealing with the flying creature, they encounter a small plant eating dinosaur. The rodeo riders decide it would make an even better attraction than Eohippus, so they chase it, only to have the dinosaur snapped up in the jaws of Gwangi, an Allosaurus. From this point on, the movie becomes full-on cowboys versus beautiful Ray Harryhausen dinosaurs. Our rodeo riders take refuge in a cave that foreshadows the Land of the Lost TV series I watched as a kid. Eventually, the cowboys capture Gwangi and take him back to town. In a finale reminiscent of King Kong, Gwangi breaks free and rampages through the town where he corners T.J. and Tuck in a cathedral.

All in all, the movie is great fun and a terrific example of a Weird Western story. As always, Ray Harryhausen’s stop-motion monsters are a marvel to behold. There’s a scene where the rodeo riders attempt to lasso Gwangi and Harryhausen seamlessly blended the live-action and stop-motion photography. The only real problem with the effects happened because the film’s post-production was rushed and Harryhausen was never allowed to color correct his footage. As a result, the dinosaurs have a tendency to change colors from purple to gray to green from scene to scene. While I’m not generally a fan of tinkering with old movies, I wouldn’t mind seeing a color-corrected special edition of this film where the dinosaurs are each a consistent color.

As a friendly reminder, this blog is supported and kept ad-free in part by my Patreon, which is at: https://www.patreon.com/davidleesummers

In the spring of 2014, when I first visited New Orleans, I looked up at the statue of Andrew Jackson in front of the St. Louis Cathedral and thought, wouldn’t it be cool if Jackson was riding a hadrosaur instead of a horse. 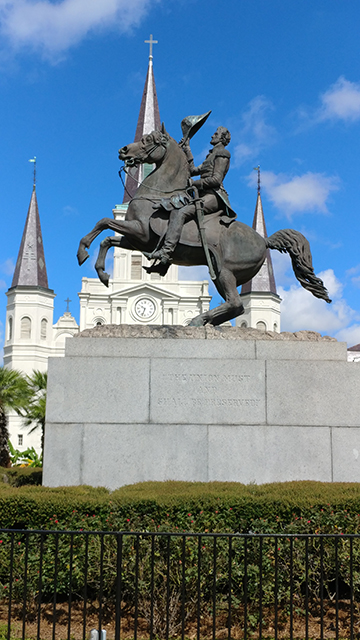 As that thought occurred to me, I could almost hear the bellowing of hadrosaurs echoing the walls of Pirate’s Alley behind the cathedral and I knew I wanted to write a story about the Battle of New Orleans with dinosaurs.

That fall, I went to MileHiCon in Denver and Dana Bell told me that she was considering an anthology about extinct and mythical creatures living outside their time. She wanted to ask what if those ancient creatures of so beloved in fiction, myth and science had not disappeared or been real? What type of uses might have been developed to handle them and how might man have felt about the thundering giants in yesterday’s, today’s, or tomorrow’s worlds? I pitched my idea and she invited me to send the story. I wrote it up, sent it in, and she ultimately accepted it. And now, I’m pleased to announce that Extinct? is available for sale and “Jackson’s Hadrosaurs” is the lead story in the volume.

What else will you find in the book? Imagine a sanctuary for dinosaurs that displaces humans. Raptors used on a distant planet as scouts for a new colony. Dodo birds leaving a record about what happened to them or an unusual way dragons help settlers. A conqueror who learns a hard lesson from a goddess and two children who create their own monster.

You’ll find lovely tales about those lumbering giants of old in ways not shown before, of those who ruled the skies and many others once thought to be mythical, and yet, here they appear in Extinct?

I’m thrilled once again to be listed in a table of contents alongside so many of my favorite authors. Here are the stories you’ll find in this anthology:

One of the things I wanted to explore in my story was the notion of herbivorous dinosaurs somehow being “tame” or “safe.” I think anyone who has spent time on a farm or around animals knows that herbivores can be dangerous if not treated with respect. On another trip to New Orleans, I stopped at a rest area and saw a crane standing in a bog while an alligator swam around hunting. The bird and the reptile were completely at ease with each other. Both seemed much more interested in eating the fish that swam around them than fighting. It made me think of symbiotic relationships in nature and I began to wonder how alligators would react to dinosaurs. Would they be friends or enemies? You can see my approach in the story.

When I was in New Orleans this past summer, I drove out to the Chalmette Battlefield, site of the real Battle of New Orleans. I was gratified to see it that it was much as I pictured it from descriptions. What’s more, I found descendants of dinosaurs wandering the field.

Extinct? is available in print at: Amazon.com

Today’s main event is the solar eclipse happening over much of the United States. I hope you have a good place to watch with clear skies and proper eye protection. I’m in Louisiana, where we should see about 80% of the sun eclipsed, presuming we get clear skies.

This coming weekend, I’ll be in Albuquerque, New Mexico for Bubonicon 49. The link will take you to their page with more information. This year’s theme is Back in Time (Time Travel). C.J. Cherryh and Sherwood Smith are the author guests of honor, Ursula Vernon is the toastmaster, and Elizabeth Leggett will be the guest artist. The convention is being held at the Albuquerque Mariott Uptown at 2101 Louisiana Blvd NE. Read on for my tentative schedule.

As usual, I will be helping with the Bubonicon Author Tea on Sunday afternoon. Check the program book for details. Because of my schedule, I’ll be helping at the second session. There are always some amazing teas to try and lovely snacks to eat.

What will be unusual for me this year, is that I won’t have a dealer’s table. I will be a free range author at this year’s Bubonicon. You will be able to find my books at the Who Else Books Table and possibly at the Barnes and Noble table as well. If you’re in Albuquerque this weekend, I hope to see you at Bubonicon!

This weekend finds me in San Antonio, Texas at the seventy-first annual World Science Fiction Convention. For better or for worse, it’s hard for me to think of San Antonio without thinking of Tim Burton’s first film, Pee-wee’s Big Adventure.

For those who have never seen it, Pee-wee Herman’s bike is stolen. He visits a phony psychic who tells him the bicycle is in the basement of the Alamo. Pee-wee then makes a cross-county trek only to find that the Alamo has no basement. To be honest, I’ve always been curious to find out whether or not the Alamo has a basement, or an underground cellar of some kind. I’ll be sure to let you know!

Along the way, Pee-wee stops off a diner in Cabazon, California where he finds giant sculptures of dinosaurs. Thing is, Cabazon is not too far from San Bernardino, where I grew up. I used to see these dinosaurs just off the freeway as I passed through. During a recent trip back to California, I had the opportunity to stop off and actually see the dinosaurs up close. 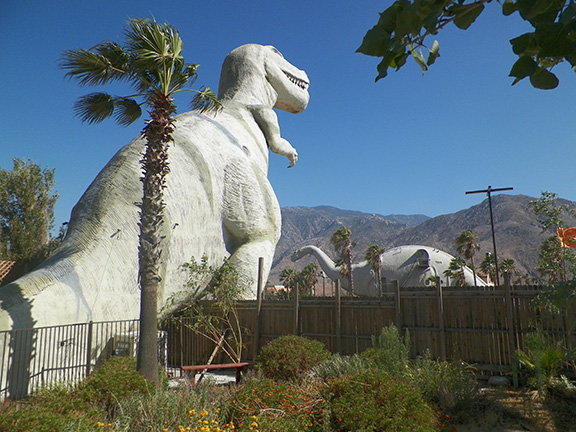 I found it the dinosaurs a fun stop. I particularly enjoyed the fact that you can climb up into them, just like they showed in the movie Pee-Wee’s Big Adventure. Inside the apatosaurus is a gift shop and you can visit it for free. There is an admission to climb into the tyrannosaurus and walk through the museum and dinosaur garden.

The museum and garden mostly consist of robotic dinosaurs in displays with modern animals. I gather the owners are creationists who would like to convince visitors that dinosaurs and humans lived on Earth at the same time. Depending on your viewpoint, this could be entertaining, inspiring or off-putting. As a person of faith who recognizes the evidence of evolution, I was in the first category. 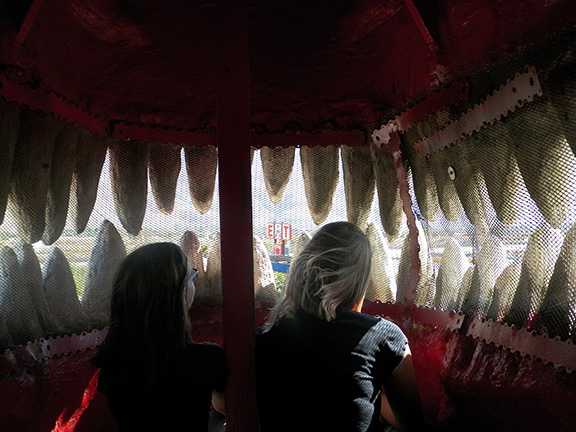 Here we see my daughters sitting in the mouth of the Cabazon Tyrannosaurus Rex, much as Pee-wee and Simone did in Pee-wee’s Big Adventure. Of course, the version of the mouth in the movie was a Hollywood Set, but it is fun to see the “Eat” sign atop the Wheel Inn through the mouth of the T-Rex. All in all it was an entertaining little roadside attraction that reminded me of a movie that brought me a smile during my college years. And who knows, these little attractions often have a way of turning up in stories down the road.