For my friends here in Las Cruces, I hope you’ll join me today for my signing and informal discussion of “Fountains of Blood” from the anthology Straight Outta Tombstone at the NMSU Campus Bookstore from 1:00-3:00pm. I’ll also have copies of Owl Dance and Dragon’s Fall: Rise of the Scarlet Order if you want to know more about the characters who appear in the story.

If you can’t make that, or you’re looking for books I didn’t have available at the NMSU signing, I’ll be at COAS Bookstore downtown next Saturday, October 21 during the Farmer’s Market from 10am until noon. Noon isn’t a hard cut off, I’m happy to stay as long as there’s a demand, but don’t delay!

The picture above is the poster I made for the signing. It features a sneak peek at the trailer we did for The Astronomer’s Crypt. Claire is looking out the control room door, considering whether or not to investigate the strange noises she’s heard. If things stay on schedule, we’ll be debuting the trailer at TusCon in Tucson, Arizona next month.

As the poster implies, the primary focus of the signing will be on The Astronomer’s Crypt since it’s such a great book for getting into the Halloween spirit. I’ll also have my other books along with me, including Maximum Velocity: The Best of the Full-Throttle Space Tales. As always, if there’s a book you’re looking for and you’ll be there, drop me a note in the comments and I’ll make every effort to have it available.

I am on the road this weekend. I just participated in a fabulous book signing for Straight Outta Tombstone at the Barnes and Noble in Glendale, Colorado. My next stop is New Orleans, Louisiana where I’ll be researching some of the locations in my next steampunk novel, Owl Riders. I’ll also be at Boutique du Vampyre on Wednesday, August 23 from 3 to 6pm to sign copies of my vampire novels and Straight Outta Tombstone. 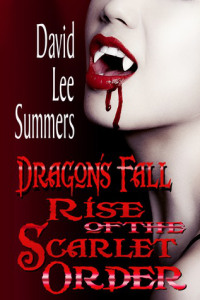 My story in Straight Outta Tombstone features the Scarlet Order vampires as they would be if they existed in my Clockwork Legion universe. It’s a fun, twisted crossover that celebrates one of the first vampire stories, Carmilla, and imagines an alternate explanation to the real life Albert Fountain disappearance. Who was Albert Fountain you ask? He was Billy the Kid’s defense attorney and his empty grave is behind my home in Las Cruces, New Mexico.

Boutique du Vampyre is a terrific shop in New Orleans’ French Quarter. They have an assortment of vampire themed gifts including apparel and accessories, dolls, jewelry, and wine. They’ll even help you create a great New Orleans vampire adventure. Come hang out with us at Boutique du Vampyre this coming Wednesday, chat for a while, and find some great gifts!

The boutique is located at 709 1/2 St. Ann Street. Call 504-561-8267 for more information, or RSVP for the signing at the event’s Facebook page: https://www.facebook.com/events/486214595060988/. Even if you can’t make the signing, you can get my vampire books from the Boutique by visiting https://feelthebite.com/collections/vampire-library-books-for-sale

Next weekend, I’ll be a participating author at Wild Wild West Con in Tucson Arizona! The event is being held from March 3-5 at Old Tucson Studios. Among this year’s guests are Thomas Willeford from the TV show Steampunk’d and Sam Jones from the movie Flash Gordon. There will be workshops, panel discussions, and evening concerts. The bands performing include The Cog is Dead, Frenchy and the Punk, and Celtica – Pipes Rock. For more information about the event be sure to visit the convention’s web page at: http://wildwestcon.com 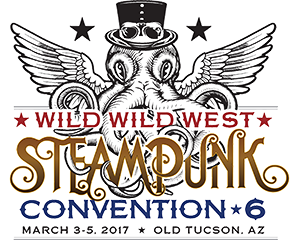 This year’s theme is “Cthulhu for President.” My schedule for the weekend is as follows:

If you’re in Southern Arizona next weekend, I hope to see you at Wild Wild West Con. When I’m not on panels, you can find me at High Chaparral where I’ll be selling my books.

Next weekend, I’m honored to be a guest at Wild Wild West Con 5 held at Old Tucson Studios just outside Tucson, Arizona from March 4-6, 2016. Click on the link above for more details. This year’s theme is Journey Around the World. Among the honored guests are Steam Powered Giraffe, Thomas Willeford, Unwoman, Kato, Aiden Sinclair and many more. Below is my schedule for the event.

When I’m not on panels, you’ll be able to find me over at the Stage 2 Vendor Area at one of the artist tables. This event is particularly special because it also is my debut signing for The Brazen Shark. If you already have a copy, be sure to bring it by for me to sign it. If you don’t have a copy yet, never fear, I’ll have plenty of copies available for sale.

From October 23-25, I will be at MileHiCon 47 in Denver, Colorado. The convention will be held at the Hyatt Regency Tech Center at 7800 E. Tufts Avenue. The author guests of honor are Kevin Hearne and Kristine Kathryn Rusch. The artist guest of honor is Ursula Vernon and the Toastmaster is James Van Pelt. My schedule is as follows:

No one can predict the weather. That’s even true for world-class astronomers and astrophysicists. As a result, the world’s premier facilities for collecting astronomical data, such as Kitt Peak National Observatory, are staffed year-round regardless of weekdays or holidays, so that we can take advantage of clear, stable skies whenever they occur. The only exception the observatory makes most years is Christmas and Christmas Eve. This year, one of my shifts happens to fall over Labor Day Weekend. Unfortunately, Tropical Storm Kevin off the coast of Baja California is also pumping lots of moisture up here, so we’re spending some of our time waiting, watching and hoping the skies will clear.

Of course, even with clouds, it’s not all waiting around, doing nothing until the skies clear. Over the course of the summer monsoon shutdown, a new Telescope Control System was installed at the Mayall 4-meter telescope. All indications are this new control system had made great improvements in the pointing and tracking performance of a 45-year old telescope, getting it ready for a new world-class spectrograph that will be installed over the coming years. Still, it means I get to learn how to drive the telescope all over again, and it’s best if I do that on these cloudy nights so I’m ready to go when the skies clear and astronomers go hunting those photons that may have taken thousands, millions, or even billions of years to reach us.

Keeping busy right now is good, since my editor dropped me a note at the beginning of the week, saying that she’s started editing my horror novel, The Astronomer’s Crypt. So now I’m at that nail-biting stage of wondering which scenes she’ll like and which ones she’ll want rewritten. Her note mentioned that I better not give her nightmares. I can’t help but wonder if my horror novel fails to give her nightmares will I have have succeeded or failed! Seriously, though, these dark and stormy nights that we’re having at the observatory right now are not a little like the one described in the novel. Stay tuned for more news!

Working Labor Day Weekend also means that I have the following weekend off, which means I get to display my books in Artist’s Alley at Las Cruces Comic Con. You can find more information about the event at: http://lascrucescomiccon.org/. I’ll be in the vendor hall all three days of the event. For all my friends in Las Cruces, I hope you’ll drop by the table and say “hi!”

Phoenix Comicon will be held June 5-8, 2014 at the Phoenix Convention Center in Phoenix, Arizona. Guests include Stan Lee, Bruce Campbell, Nathan Fillion, Adam West, Charlaine Harris, Jim Butcher, and many many more. Once again, I’m honored and humbled to be there among such a great lineup. You can get all the details about the event at phoenixcomicon.com.

I’m doing a mix of science, steampunk, and poetry programming. Here’s my schedule as I know it. I’ll update this as it evolves and be sure to check in at the event for any last-minute updates. I expect to be on hand for the entire event. When I’m not at a scheduled event, look for me at booth 2429 in the exhibitor area.

Next week, I’ll be attending LoneStarCon 3, the World Science Fiction Convention, in San Antonio, Texas. I’m excited partly because it’s WorldCon and many of my favorite writers will be there, but I’ve also wanted to visit San Antonio for a while. A few years ago, I discovered that I’m a distant nephew of Davy Crockett, so I’ll definitely pay a visit to the Alamo while I’m there. The convention is being held from August 29 through September 2 at the Henry B. Gonzalez Convention Center in downtown San Antonio. You can get all the details about the convention at lonestarcon3.org.

My schedule for WorldCon is as follows:

Looking forward to seeing some old friends and making many new friends in San Antonio next week. If you’ll be there, drop me a note or a comment so I can be on the lookout for you.

Two wonderful events are coming to Tucson, Arizona on the weekend of March 8, 9 and 10. The first is Wild Wild West Con, which will be held at Old Tucson Studios on all three days. The other is the Tucson Festival of Books which will be held at the University of Arizona on March 9 and 10. I’m fortunate enough to be able to attend both events. If you’ll be in the area, I hope you’ll join me. Learn more about the events, venues, and people mentioned by clicking the links throughout the post.

My company, Hadrosaur Productions, will be sharing booth 106 with Marina Martindale’s Good Oak Press. We’ll be under the banner “Martindale and Summers.” We’ll have our complete line of books available along with my novels that have been published by other houses. My wife, Kumie Wise, will be manning the area with Marina on Saturday, March 9. I will be at the booth all day on Sunday, March 10. We’d love to see you whichever day you arrive!

Wild Wild West Con is a Steampunk convention held at Old Tucson Studios, just outside Tucson, Arizona. It features make-and-take workshops, panel discussions, and concerts by such luminaries as Steam Powered Giraffe and Abney Park. I will be there all day on Saturday, March 9. Here’s my tentative schedule of panels and presentations:

I was also a participant at the very first Wild Wild West Con in 2011 and it was a blast. If you’re in Tucson next weekend, I hope you get a chance to sample one or preferably both of these wonderful events!

Space Battles is the sixth anthology in the Full-Throttle Space Tales series. It is scheduled for release on April 18. Edited by Bryan Thomas Schmidt, Space Battles brings to life 17 explosive tales of spaceship battles by such veterans of the series as Anna Paradox, Gene Mederos and C.J. Henderson. Also aboard for the ride are some newcomers, not the least of which is Mike Resnick.

My story in the anthology features pirate captain Ellison Firebrandt and the crew of the Legacy. This time they have a rematch with Captain William R. Stewart of the New New Jersey, who they first met in the story “Hijacking the Legacy” from Space Sirens. Several of these characters are also featured in my Old Star/New Earth series.

On release day, April 18, there will be a special edition of the Twitter chat SFFWRTCHT hosted by Bryan Thomas Schmidt focused on Space Battles. I’ll be on hand along with several of the other authors to discuss the book and answer questions about our stories. If you have a Twitter account, just look for #SFFWRTCHT to join in the conversation.

Space Battles is available to order from: Barnes and Noble and Amazon.

Here are a few other items that might be of interest: