This past week, I started a rewatch of Star Trek: The Next Generation with my youngest daughter. The fact that this rewatch coincides with the show’s thirtieth anniversary and this weekend’s premier of Star Trek: Discovery is mostly coincidental. I suspect the part that isn’t coincidence has to do with all the ads I’ve been seeing for Star Trek: Discovery. They’ve certainly put Star Trek on my mind.

When Star Trek: The Next Generation debuted, I was in my senior year at University. I remembered being glued to the television on Saturday afternoon when each new episode aired on syndicated television. Back in those days, I was so much a fan of the original series that I could quote lines verbatim. I typically could identify the episode within the first minute. In the early days, I didn’t feel The Next Generation was quite as good as the best episodes of the original series, but it was never as bad as the worst episodes, either. Most importantly, it felt like Star Trek.

It would probably come as a surprise to friends who knew me in those days that Star Trek: The Next Generation was the last Star Trek series I watched in its entirety. I have seen and enjoyed episodes of Deep Space Nine, Voyager, and Enterprise, but as I began my astronomy and writing careers, television became less of a priority in my life and I just didn’t make time to follow those series.

One of the things I really like in Star Trek: The Next Generation is the way characters will do everything they can to find a mutually agreeable solution before resorting to violence. In many ways, this approach helped to shape Ramon and Fatemeh in my steampunk novels. Of course, Star Trek gave a lot of lip service to the “prime directive”—the policy of not interfering with cultures more primitive than them. In many ways, my alien traveler character Legion explores the bad, and even some good, that might happen from violating such a directive. Legion sparks off global conflict, but he also opens people’s minds, allowing them to see the benefits of technology and to see other peoples’ perspectives. 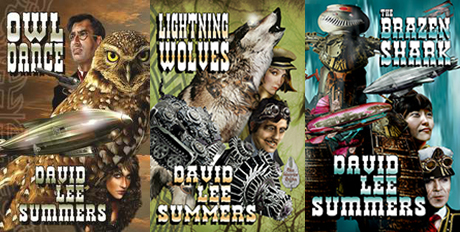 One aspect of Star Trek: The Next Generation that particularly struck me this time around was the idea of a “post-atomic horror” in the middle of the twenty-first century. When I first watched the series in the post-Reagan years of the 1980s, that seemed extremely pessimistic. As the years went by, I had reason to hope that the idea would disappear just as much as the original series’ Eugenics Wars of the 1990s did. It’s been very disheartening to see the specter of nuclear conflict raise its ugly head again in the last few months. I sincerely hope that world leaders can find a path to negotiate rather than let this science fictional prediction come to pass.

Before I wrap things up, I’ll turn briefly to Star Trek: Discovery. To be honest, I haven’t decided whether I’m going to watch, at least initially. A lot of what I’ve seen looks good and it looks like a show I would enjoy. I’m particularly encouraged to see that Michelle Yeoh, one of my favorite actresses, is part of the series. The big question for me is whether I want to sign up for CBS All Access to watch. The cost itself isn’t a big problem. More to the point for me is how little I watch television these days. For me, I’d be signing into the network to watch just one show. I may wait for a few episodes to come available, then try the “one-week free” option and then see how I like the show.

Before I go, I did want to share a couple of nice appearances this week at The Curious Adventures of Messrs Smith and Skarry Blog. I was interviewed about multicultural steampunk: https://smithandskarry.wordpress.com/2017/09/20/soup-of-the-day-with-steampunk-author-david-lee-summers/

Also, my novel The Brazen Shark received a very nice review, which you can read at: https://smithandskarry.wordpress.com/2017/09/22/morning-cuppa-the-brazen-shark-steampunk-fiction/

I’ll leave you with the Vulcan wish, “Live Long and Prosper” and its reply, “Peace and Long Life.”

Today, I’ll be in El Paso, Texas for the Steampunk Art Fest, being held at Barmen Kitchen and Patio at 4130 N. Mesa from 2 until 9pm. Although work at Kitt Peak National Observatory will call me away, the fun will continue on Sunday from 4 until 9:30pm. There will be a fire show, live music, and a costume contest, plus steampunk artists. I will be there today and will have a selection of my books available and will be happy to chat with you!

This past week, I’ve been catching up with some 2016 films I missed. One of them was the fine science fiction film, Arrival, starring Amy Adams and Jeremy Renner. It tells the story of twelve mysterious alien spacecraft that land around the world. Every few hours, the aliens open the door and allow people in to talk to them. Adams plays a linguist attempting to understand their language while Renner plays a physicist.

The aliens in the film prove to be a fine example of aliens with tentacles, which I wrote about back in February. These creatures have seven legs and look like giant octopi or squids.

Another fascinating aspect of these aliens is that they don’t perceive time linearly like humans do. This leads the characters to ask whether they would make the same choices if they knew the future as they would if they didn’t. I don’t want to give away too many specifics because that risks spoiling the movie’s central mystery. However, it struck me that these aliens are not unlike the character Legion in my Clockwork Legion novels.

Legion does see time linearly like humans, but he is a living consciousness transferred into a vast computational array with tremendous predictive abilities. Legion’s appearance on Earth helps to give rise to the steampunk alternate reality. In my case, I worked to avoid the deus ex machina kind of plot where Legion simply tells humans how to build advanced technology. Rather, I use Legion as a means to clear away all doubt. Humans design the machines and Legion tells them whether or not they’re possible. This in turn means the leaders of society are willing to fund those inventions ahead of their time. Of course, another aspect of Legion is that he doesn’t always make the best choices about which humans to talk to.

If you’d like to meet Legion, be sure to check out the novels at:
http://www.davidleesummers.com/books.html#clockwork_legion

I remember the first episode of the original Star Trek I watched. I must have been around five or six years old and Captain Kirk was being chased around the desert by the largest, most ferocious green lizard man I had ever seen. 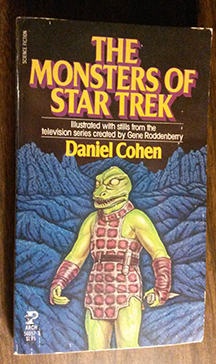 When the creature first appeared hissing and growling with its strange, segmented eyes, it would have sent me to hide and watch from behind the couch if our couch hadn’t been backed against a wall. Scared as I was, the episode hooked me and even made me feel a little sorry for the green lizard man when Captain Kirk finally beat him. That likely was not only the beginning of my love of Star Trek but my love of monsters as well.

In 1980, soon after the release of Star Trek: The Motion Picture, a book appeared at my local bookstore called The Monsters of Star Trek. It was a thin book clearly designed to capitalize on the new movie. On the cover was the Gorn—the lizard man from my childhood—so I had to pick it up. The book discussed mind-bending aliens such as the Talosians from the series pilot and Sylvia and Korob from Star Trek’s twisted Halloween episode “Catspaw.” It talked about dangerous animals such as the giant space amoeba and the ape-like Mugato. Browsing through the pages today, it strikes me that the original Star Trek dealt with vampires not just once but twice. In the first season, they met a salt vampire, then in the second, they met a vampire cloud that Kirk obsessively hunted. No doubt this contributed to my own vampire novels.

Of course many of Star Trek’s monsters prove to be misunderstood aliens or aliens who don’t understand humans. The most recent Star Trek movie, Beyond had an alien that definitely fell into this latter category—a swarm-like race led astray by an outside force. (I won’t say more, lest I give spoilers). I’ve always found swarms a bit scary, since they’re a large force with a single purpose, operating like one organism. For me, the best zombie stories work from this basis. One zombie is a little scary. A bunch of zombies working in concert is really scary! You can find my zombie stories in the anthologies Zombiefied: An Anthology of All Things Zombie and Zombiefied: Hazardous Materials from Sky Warrior Publishing.

As it turns out, zombies aren’t my only look at the scary swarm. In Owl Dance, I introduce Legion, a swarm of microscopic computers who decide to help humans evolve in the second half of the nineteenth century causing near disaster. Legion clearly took some inspiration from Star Trek. In fact, one of the chapters in The Monsters of Star Trek is called “Androids, Computers, and Mad Machines.”

I never really thought of myself as a horror writer or even a horror fan until I started reading Stephen King and H.P. Lovecraft as an adult and writing my first vampire stories. That said, it’s interesting to look back and see how scary stories were influencing me even from an early age. Still, it should really be no surprise. I’ve often said my interest in science fiction novels began from paying attention to the writer credits on the original Star Trek. One of those writers was none other than Robert Bloch, a writer mentored by H.P. Lovecraft who would go on to write the novel Psycho. Bloch wrote the Star Trek episodes “Wolf in the Fold” about an evil entity who possessed Scotty and made him a murderer, “What Are Little Girls Made Of?” which featured Ted Cassidy from The Addams Family as a decidedly creepy android, and the aforementioned Halloween episode “Catspaw.” If you’re looking for some good creepy TV, you could do worse than hunt up copies of these episodes on video!