Marshal Larissa Seaton is a character who appears in my novel The Brazen Shark from the Clockwork Legion steampunk series. 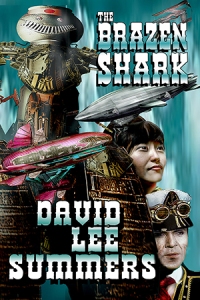 She also appears in some of my short stories set in the same universe, including the story “Fountains of Blood” which will be in the upcoming Straight Outta Tombstone anthology. In my world, President Rutherford B. Hayes appoints her to be a U.S. Marshal after her work recovering a lightning gun from Curly Bill Bresnahan in the novel Lightning Wolves. It’s a fair question to look back at history and ask whether it’s realistic to imagine a woman marshal in 1877.

As it turns out, Larissa of my fictional world was only appointed marshal seven years before it happened in real life. 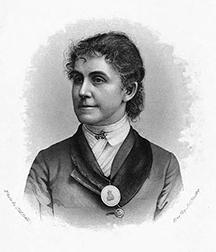 In 1884, John Couzins was appointed marshal for the Eastern district of Missouri and he appointed his daughter Phoebe as one of his deputies. When John Couzins was killed in 1887, President Grover Cleveland appointed Phoebe interim marshal. However, she only held the position for two months before a man was appointed as her full-time replacement. Not only was Phoebe Couzins the first woman to become a U.S. Marshal, she was the first woman in the United States to get a law degree and the first woman to graduate from Washington University in St. Louis. She was an early supporter of both women’s suffrage and the temperance movement. In later years, she actually renounced both and became an active lobbyist for the American Brewers Association.

There were several notable women deputies marshals with longer careers. 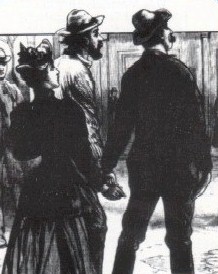 Perhaps the most famous was Ada Carnutt of Oklahoma. In 1893, she arrested nineteen men at the Black and Roger saloon in Oklahoma City for perjury. Shortly before Christmas that same year, she single-handedly arrested two forgers and escorted them to jail. The two heavily armed men supposedly scoffed at being arrested by an unarmed woman, but she pointed to the crowd around and told them she was willing to deputize every one of them to help her. Newspapers of the day noted that after the arrest she went back to her favorite hobby: china painting.

Even before Ada Carnutt, Mrs. F.M. Miller was making a name for herself as a deputy marshal in Paris, Texas. Unlike Ada Carnutt, Mrs. Miller had no problem carrying weapons. According to the November 6, 1891 issue of the Fort Smith Elevator, “The woman carries a pistol buckled around her and has a Winchester strapped to her saddle. She is an expert shot and a superb horsewoman, and brave to the verge of recklessness.” The article also noted that she was a “charming brunette” and wore a sombrero.

So, while true Larissa Seaton would have been the first woman U.S. Marshal in history if she existed, it wouldn’t be long before more brave women would stand alongside her. You can find Marshal Larissa in the following books: