Saturday’s post about Space: 1999 didn’t come out of a vacuum. On Christmas day, when I went to the Big Finish Productions website to download some Doctor Who audio, I discovered they had produced an audio re-imagining of the Space: 1999 pilot episode, “Breakaway.” This is the episode where a nuclear stockpile on the Moon explodes, blasting it out of Earth orbit and sending it on a journey through space. This appealed to the part of me that really enjoys writing retrofuturistic stories. After all, 1999 is now in the past and the series is now a look at “what could have been” more than “what will be.” Big Finish didn’t just create a new version, they expanded it into a two-hour movie-length version with more details. I recently downloaded it and gave it a listen and I’ll share my thoughts. Before I do, I thought it would be fun to go back and read the original novelization of “Breakaway” released when the series was on the air. Novelizations often give a chance to explain more about the characters and the story than you see on screen, so I thought that might give me a little more background. It turns out that my neighborhood used bookstore had four copies of the novelization in their science fiction section.

As it turns out, Breakaway by E.C. Tubb is not simply a novelization of the first episode. It attempts to weave four episodes from the series into a single narrative arc. With a mere 141 pages, Tubb doesn’t spend a lot of time delving into backstory or character. What we get are effectively novelettes of the episodes “Breakaway” and “A Matter of Life and Death.” The two episodes “Ring Around the Moon” and “Black Sun” are combined into a third novelette. We don’t really learn anything from these stories that we didn’t learn from watching the episodes. Tubb does work to develop the romance between Commander Koenig and Dr. Russell. He also provides a more direct narrative link between the resolution of “Ring Around the Moon” and the events of “Black Sun.” It was interesting to see that Tubb killed off Commissioner Simmonds, an annoying politician from “Breakaway” even though the character would actually meet a far more interesting end later in the series.

The Big Finish production of “Breakaway” proved much more ambitious. Writer Nicholas Briggs, who has written many of the Big Finish Doctor Who stories teamed up with Jamie Anderson, son of Gerry and Sylvia Anderson, the original Space: 1999 producers, to re-imagine the series. The plot is effectively the same as the original plot, Commander John Koenig has been dispatched to Moonbase Alpha to launch a mission to the distant planet Meta. The mission is in danger because the crew of the probe has started to succumb to a mysterious illness.

Solving the mystery is the primary impetus of the original pilot. In the new version, Koenig learns that his predecessor has been ordered to cover up that the illness is even happening and Dr. Russell is trying desperately not only to learn what’s happening but trying to keep the mission from getting launched until they are sure the people going to Meta won’t get sick. In effect, this new version takes a dramatic situation that already existed and ratchets it up so that it becomes much more engaging. What’s more, Briggs and Anderson developed a clever new way to get the Moon to break away from Earth orbit. I won’t say too much about how it’s done, because that ends up being something of a spoiler for the end of the episode. However, where the original meant packing an implausible amount of explosives on the moon, this one gives us an explanation that makes me think it could happen. Certainly, I’m much more willing to suspend my disbelief for the new explanation than the original one.

Briggs left us with something of a cliffhanger at the end of his version of Breakaway. Fortunately, new episodes of Big Finish’s Space: 1999 are due this month. I’ve already reserved my copies to find out what happens! You can get details about the Big Finish version of Space: 1999 at: https://www.bigfinish.com/hubs/v/space-1999

One of the things I love about this re-imagining of Space: 1999 is how it improves on something that was good albeit flawed. This was one of the things I tried to do when I created my new edition of The Pirates of Sufiro. I worked to keep the parts of the novel that were good, the characters people responded to, but I also tried to take a good hard look at parts of the book that didn’t work so well for readers and revise them and make sure I created good, solid explanations for why things happened. You can learn about The Pirates of Sufiro at: http://davidleesummers.com/pirates_of_sufiro.html

This weekend I’m at El Paso Comic Con in El Paso, Texas. If you’re in the area, I hope you’ll drop by. For most of the weekend, you’ll find me at booth A77 in the Vendor Hall. You can learn more about event at http://elpasocomiccon.com/

Just over a month ago, I mentioned having the opportunity to meet Sam J. Jones, who played Flash Gordon in the 1980 movie of the same name. I bought this lovely Alex Ross poster based on the movie and he signed it for me.

Ever since then, I’ve been renewing my acquaintance with Flash Gordon. I first discovered the character watching the serials on Sunday afternoon television. I remembered them fondly enough that I was eager to see the Dino De Laurentiis film in 1980. The problem was, I was exactly the wrong age for the film. At that time in my life, I took my science fiction way too seriously. I loved Star Trek because of its serious approach to the future. Star Wars was fun, but I almost found it a guilty pleasure. The camp approach of Flash Gordon was just way over the top for me at the time.

Over the years, the 1980 Flash Gordon has grown on me. I’ve come to appreciate how fun the film is, especially with Max Von Sydow and Topol chewing the scenery as Ming the Merciless and Dr. Hans Zarkov respectively. In my most recent viewing, I even spotted a young Robbie Coltrane, best known to most people today as Hagrid from the Harry Potter films in a bit part. In a bit of twist, given my love at the time, Deep Roy who plays Keenser in the new Star Trek films even has a bit part in Flash Gordon.

Since watching the movie, I found a lovely collected edition of Alex Raymond’s original comic strips from the 1930s. I’ve been pleased to discover that the 1980 movie is, in many ways, a very faithful adaptation of the material. Really, my one disappointment is that Prince Thun of the lion men gets such a tiny moment in the film, and he’s not much of a lion man. 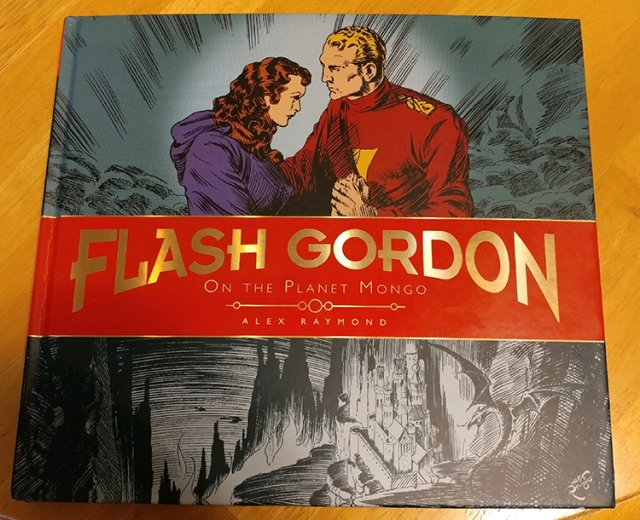 It strikes me that it’s very fitting to rekindle my interest in Flash Gordon at a steampunk convention. Flash Gordon really epitomizes what we mean when we talk about “retrofuturism.” Reading the original comics is a view of the future as people saw it thirty years before I was born. The 1980 movie worked to recapture that retrofuturistic perspective.

I also see a lot of the high octane excitement that fuels my adventure stories whether they be set in the future or the past. Hopefully I do slow it down a little bit. Whereas I try to make sure something exciting, or at least interesting, happens in each chapter or section of a chapter, the comics literally work to assure something exciting happen in every panel. It’s a little stunning to see how often the word “suddenly” appears leading a panel of narration.

I should note, these strips are as much or perhaps more over the top than the 1980 film. I nearly lost it when Flash, Dale, and Dr. Zarkov are suddenly beset by Squirlons—flying squirrels from the Planet Mongo whose bite induces madness! Also near the end of this volume, Flash Gordon goes on to don essentially the same outfit Zapp Branigan would wear in Futurama. Reading the comic also informed me that Jabba the Hutt makes Princess Leia do a Dale Arden cosplay in Return of the Jedi. Dale wears almost exactly that infamous outfit throughout the first half of the book.

It’s clear Flash Gordon flying around in rocket ships with fins and battling dinosaurs, dragons, and shark men isn’t serious science fiction, but it sure is fun. As I’m writing Owl Riders, I hope to emulate some of that fun as ornithopters and air ships fill the sky and Apache battle wagons give the cavalry trouble in Arizona. In the process, I hope to make it just a little more plausible so you might wonder if it really could have happened. Meanwhile, I hope to use a few less adverbs in the process. Although I might have to sneak in at least one “Suddenly” as a tribute.