Aaarh, mateys! Today be International Talk Like a Pirate Day and as a writer of space pirate fiction, I would be remiss if I didn’t mark the occasion. In fact, me hearties, I haven’t just written about space pirates, but airship pirates have appeared in my steampunk stories and the real life pirate, Grace O’Malley makes an appearance in my novel Vampires of the Scarlet Order.

I’m a big fan of Stevenson’s famous pirate novel and I love Newton’s iconic performance as Long John Silver, so I’m happy to celebrate the day. As it turns out, Robert Louis Stevenson and I share a birthday. So, I’ve long thought it appropriate that I should include pirates in my fiction. What’s more, I can see how pirates stir the imagination. despite the fact that they steal from others to make a living and often murder to do so. If you look into the history of piracy—particularly during piracy’s “golden age” of the seventeenth and eighteenth centuries—you find that discipline on military and legitimate trading vessels was brutal and crews were paid almost nothing. On pirate ships, the crews had more of a voice in how things were run and the booty was split more evenly.

Aside from Robert Louis Stevenson’s Treasure Island, I’m also a fan of Leiji Matsumoto’s Space Pirate Captain Harlock. In Matsumoto’s stories, Harlock is a pirate mostly in the sense that he turns his back on the corrupt and decadent “legitimate” government of Earth so he can fight to preserve the planet. He fights under the skull and crossbones flag because it’s a symbol that one should fight to the death for freedom.

So, me hearties, when you talk like a pirate today, try to remember the best pirate ideals. If ye find yourself in possession of fine treasure, split it fairly with yer crewmates. If ye see the world as unjust, take a stand to make it a better place. When it’s all said and done, take a nip o’ rum and settle in with a good book. Treasure Island by Robert Louis Stevenson and Space Pirate Captain Harlock by Leiji Matsumoto would be good choice. You could also seek out adventures I’ve written featuring Captain Ellison Firebrandt, the samurai Imagawa Masako, or Grace O’Malley. You can find them in the following books:

Susan over at the Dab of Darkness blog tagged me in a post about books and time travel. This seemed like a fun topic near and dear to my heart and a good way to start a new week.

What is your favorite historical setting for a book? 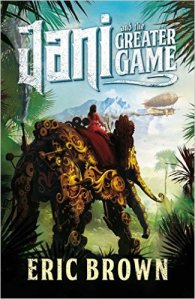 The hard part about this one is that I love history and I usually find something to enjoy in any historical setting I explore. However, I think if I had to pin down one era it would be the Victorian era that’s so near and dear to the steampunk I write. In fact, I’m delighted to have added a signed copy of Gail Carriger’s Changeless to my collection. That said, although I do enjoy a good novel set in Victorian England itself, my favorite books are ones set in other places of the world at the time, including the Wild West such as Cherie Priest’s Clockwork Century novels or India, such as Eric Brown’s Jani and the Greater Game or even the Africa of Jack Tyler’s Beyond the Rails series.

What writers would you like to travel back in time to meet?

There are lots of writers whose work I admire, but two of the writers who most interest me are Robert Louis Stevenson and Lafcadio Hearn. Stevenson and I share share two initials, a birthday, and a love of pirate stories. Hearn was captivated by the stories of the places he immersed himself in from New Orleans to Japan. Not only have their writings inspired me, they both traveled extensively at a time when it was not always easy to do so and I’d love to hear some of the stories they didn’t have a chance to write down.

What books would you travel back in time and give to your younger self?

The books I’d point my younger self to actually existed back then, but I’d kick myself and actually get myself to read them! I would go back and hand myself Stephen King’s ‘Salem’s Lot. I had preconceived notions that I wouldn’t enjoy King’s work because it was horror, but I would have loved his spooky tale of vampires and I would have been captivated by his great use of characters. I could have learned a lot from reading that book which took my many years to figure out on my own—that I’m still figuring out. Discovering King at a younger age would have started that process a lot earlier!

I’d also encourage myself to read Heinlein’s young adult novels. I remember them on the bookstore shelves when I was a kid, but for some reason never took them home. I would have had a blast with them and their sense of adventure.

If I had to pick a contemporary novel to take back in time, it would have to be a steampunk novel. Clementine or Ganymede by Cherie Priest would have been good choices that my younger self would have liked. It might have kickstarted the idea that I could write steampunk earlier than I did. (Although arguably I started pretty early since I sold “The Slayers” in 2001!)

What book would you travel forward in time and give your older self?

I’d give myself a copy of James Cloyd Bowman’s Pecos Bill: The Greatest Cowboy of All Time. That’s the book that started my love of tall tales and strange stories set in the wild west. It’s actually a book I don’t own, but have recently discovered it’s still in print, so I do need to remedy that. It would be fun to go back and see how Bowman’s version of the Pecos Bill story and the wild west inspired me.

What is your favorite futuristic setting for a book?

It depends on what your asking. Would I like to live in that futuristic setting, or do I think a good story is told there? There’s lots of futuristic settings that make a good story, but I wouldn’t want to live in that world! The Star Trek universe is an example of a futuristic setting which both has great stories, including many great novels, and where I’d like to live. The same is true of A. Bertram Chandler’s John Grimes novels. Both give generally optimistic visions of the future while suggesting plenty of adventures and many worlds to explore. I’m also fond of Ray Bradbury’s Mars, where the past meets the future in a kind of rustic setting on an alien world.

What is your favorite book that is set in a different time period (can be historical or futuristic)?

The hard part about this question is that so much of what I read is set in a different time period, it’s hard to pick just one! However, I’m going to pick The Moon is a Harsh Mistress by Robert A. Heinlein. I love its mix of engaging characters, politics, and attempt at examining the hard realities of making a colony on another world. This is one I remember enjoying a great deal and is one of the books that inspired me to sit down at the keyboard and actually try my hand at writing. It has been a long time since I’ve read it and it’s one of the books I’d like to go back to and see how well the book stands up to my memory.

Spoiler Time: Do you ever skip ahead to the end of a book to see what happens?

I used to do this all the time when I was a kid, but I stopped. I’m not exactly sure when that happened. My best guess would be during my college and graduate school days when most of my reading swapped over to comics and graphic novels for a time. In those, a glance at the end can be a major spoiler!

If you had a Time Turner, where would you go and what would you do?

It would be seriously tempting to go back and “fix” painful incidents in my life. For example, I could take some modern textbooks on cardiac care back to doctors who were tending my dad in the 1980s. However, I’ve read enough books cautioning about the dangers of time travel to know how fraught with peril these kinds of well-meaning things can be! Even Hermione Granger was cautioned about interfering with her own time stream.

Favorite book (if you have one) that includes time travel or takes place in multiple time periods.

Of course, the original and classic is The Time Machine by H.G. Wells, but perhaps my favorite is The Man Who Folded Himself by David Gerrold. Instead of avoiding possible time travel paradoxes, Gerrold embraces them and looks at what happens when someone tampers with time, including his own timeline. The book’s open discussion of sexuality kind of freaked me out as a kid raised in a conservative, Christian household, but it also opened my eyes to other lifestyles than the one I was told was “correct.”

What book/series do you wish you could go back and read again for the first time?

I think it would be Patrick O’Brian’s Aubrey/Maturin series. I hate to admit, but I still haven’t read all of them and those I’ve read have been in kind of a haphazard fashion, so I’d love to go back and make a real dedicated reading of the complete series.

Inviting others to play along.

I’m always a little hesitant to tag lots of people in these kinds of posts since I don’t want to make anyone feel obliged to play along. Also, it’s always possible someone was already tagged by someone else and I just missed their post. That said, if you’ve read this post and would like to take a crack at the answers, you’re more than welcome. If you tag me as the guy who inspired you and let me know, I’ll mention you here.

The following people have tagged me back, so go check out their answers!