I am on the road this weekend. I just participated in a fabulous book signing for Straight Outta Tombstone at the Barnes and Noble in Glendale, Colorado. My next stop is New Orleans, Louisiana where I’ll be researching some of the locations in my next steampunk novel, Owl Riders. I’ll also be at Boutique du Vampyre on Wednesday, August 23 from 3 to 6pm to sign copies of my vampire novels and Straight Outta Tombstone.

My story in Straight Outta Tombstone features the Scarlet Order vampires as they would be if they existed in my Clockwork Legion universe. It’s a fun, twisted crossover that celebrates one of the first vampire stories, Carmilla, and imagines an alternate explanation to the real life Albert Fountain disappearance. Who was Albert Fountain you ask? He was Billy the Kid’s defense attorney and his empty grave is behind my home in Las Cruces, New Mexico.

Boutique du Vampyre is a terrific shop in New Orleans’ French Quarter. They have an assortment of vampire themed gifts including apparel and accessories, dolls, jewelry, and wine. They’ll even help you create a great New Orleans vampire adventure. Come hang out with us at Boutique du Vampyre this coming Wednesday, chat for a while, and find some great gifts!

The boutique is located at 709 1/2 St. Ann Street. Call 504-561-8267 for more information, or RSVP for the signing at the event’s Facebook page: https://www.facebook.com/events/486214595060988/. Even if you can’t make the signing, you can get my vampire books from the Boutique by visiting https://feelthebite.com/collections/vampire-library-books-for-sale 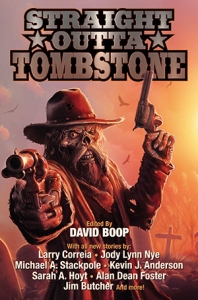 This Saturday, I’ll join bestselling authors Jim Butcher, Kevin J. Anderson, Sarah A. Hoyt, Peter J. Wacks, Bryan Thomas Schmidt, Naomi Brett Rourke, Sam Knight and editor David Boop to discuss the genesis of the anthology Straight Outta Tombstone, reminisce about our careers, and sign our books. 5280Geek podcast will be there recording, and with every book sold, a portion will be donated to Reading Partners, an organization dedicated to helping children K-4 improve their reading scores!

In my story “Fountains of Blood,” Billy and Larissa from the Clockwork Legion series tangle with Marcella and Rosen from the Scarlet Order vampire series while caught up in the historical Albert Fountain disappearance. I’m not the only author revisiting familiar characters. Jim Butcher reveals the origin of one of the Dresden Files’ most popular characters in “A Fistful of Warlocks.” And Kevin J. Anderson’s Dan Shamble, Zombie P.I., finds himself in a showdown in “High Midnight.” Plus there are stories from Larry Correia, Alan Dean Foster, Jody Lynn Nye, Michael A. Stackpole, Phil Foglio, Robert E. Vardeman and many more. Readers in Las Cruces and Tucson might even find copies I’ve signed at their local Barnes and Noble stores.

Lots of fun and a few surprises at this event! Mosey on down and celebrate this amazing anthology!

This weekend, I’m at Wild Wild West Con, which is a steampunk convention being held at Old Tucson Studios just outside of Tucson, Arizona. If you’re in the area I hope you’ll drop by. The link above will take you to the convention’s home page where you can get more information. I hope to post some photos in the next couple of weeks.

Next weekend, I’ll be back in Tucson for the Tucson Festival of Books at the University of Arizona. Clicking the name or the logo to the left will take you to the festival’s home page for more information. I see lots of great authors scheduled including Greg Bear, Jeffery J. Mariotte, Marsheila Rockwell, Beth Cato, Diana Gabaldon, Jonathan Maberry, and many more. I’m scheduled for the following event:

I will also be signing books at the Massoglia Books Booth during the weekend. Be sure to stop by the book and check for times. They’re booth number 446 and in addition to my books, they have an outstanding selection of used and collectible books. I can easily spend hours just browsing their selection.

Hope to see you there!

Autumn has arrived, which means my working nights at Kitt Peak National Observatory will start getting longer until we reach the winter solstice just before Christmas. Autumn also heralds several other changes. Among them, I have a new supervisor and the National Science Foundation is no longer providing operational support for the 2.1-meter telescope. One upshot is that I’ve been looking at my schedule cadence with my co-workers. Here’s what that cadence looks like:

Basically, my shifts at the observatory follow a fifteen day cycle. There are three “Available” or “on-call” days. I don’t work all of those, and most of the time I’ve been on call to help astronomers start their observing runs at the 2.1-meter telescope. Then I work at the WIYN 3.5-meter telescope for three nights. After that I work at the Mayall 4-meter telescope for three nights, then I get six nights off, and the whole thing starts all over again. Because it’s fifteen days, my schedule drifts through the work week. If one cycle starts on Sunday, the next one will start on a Monday, and the one after that a Tuesday.

Right now, it doesn’t look very likely this cadence will change much. Perhaps the only change is that instead of supporting the 2.1-meter, I may be set up to work from home periodically on the never-ending task of telescope and instrumentation documentation. The reason it’s never ending is that we’re routinely getting new instrumentation and to keep the telescopes cutting edge, they are often modified and upgraded.

Of course, between writing, editing and astronomy, I don’t really get many days off. I get to go home and shift gears. This upcoming break is pretty exciting though. I’ll be shipping out volume 10, issue 1 of Tales of the Talisman Magazine to subscribers and contributors. Although we’re taking a break after this year, we’re not letting up on quality. This is our tenth year and we want to make it a special one!

As a reminder, there are only four more days on the Lachesis Publishing Anniversary sale. All ebooks are half price. This would be a great time to try my science fiction novel, The Solar Sea, which tells the story of the first solar sail voyage to the outer planets. My novel Dragon’s Fall: Rise of the Scarlet Order, which tells how a group of vampires came together to form a team of mercenaries in the middle ages is also on sale.

Finally, on Saturday, October 4, I will be signing copies of Owl Dance, Lightning Wolves, Vampires of the Scarlet Order, and Dragon’s Fall: Rise of the Scarlet Order at COAS Books Downtown in Las Cruces, New Mexico from 10am until noon. If you’re in town, I hope you’ll drop by!

In September and October, I’m proud to be participating in two local events in Las Cruces, New Mexico. Earlier this year, I was delighted to hear that Zia Comics would be hosting the first annual Las Cruces Comic Con. The convention is now less than one week away. It takes place September 5-7 at the Las Cruces Convention Center.

Featured guests at the convention include Ray Park—Darth Maul from Star Wars: The Phantom Menace and Toad from Bryan Singer’s X-Men—and Jason Ybarra—Baboo and other monsters from Mighty Morphin’ Power Rangers. Events include gaming, a costume contest and a vendor hall full of people with goodies to tempt you. I’ll be one of those vendors. Look for me and my books among the artist tables!

On October 4, 2014, I will be signing my steampunk and vampire novels at COAS Books at 317 N. Main Street in Las Cruces.

My vampire novels make a great Halloween read and this is a great time to pick them up as a gift for a friend or a treat for yourself as the nights begin to lengthen. If vampires aren’t your thing, consider a little wild west steampunk to entertain you as the autumn winds cool the air. COAS has long been one of my favorite used bookstores. They have a tremendous selection of books, movies, and games between their two locations. They have always been tremendously supportive of local authors. If you’re local to Las Cruces, or just visiting, I hope you’ll drop by. If you don’t live in Las Cruces, you can learn more about my novels by visiting the book page on my website.