I spent New Year’s Eve at Kitt Peak National Observatory as a snow storm blew over the mountaintop. Operations are scheduled at the observatory every night of the year except for Christmas Eve and Christmas. Even then, we have staff on the mountain during the holiday to service the instruments and keep an eye on the site. My job requires that I be at the telescope even during inclement weather. That’s partly because the weather is capricious and we need to be available in case the weather unexpectedly clears. I also need to service the instruments and I’m also the guy who calls the Arizona Department of Transportation to let them know how much snow they can expect at the top of Highway 386, which is the highway that leads to the top of the mountain.

Partly because I was working and partly because Kitt Peak is located on the land of the Tohono O’Odham Nation, no alcohol is allowed on the site. So, I toasted the new year with a strong cup of coffee. Because it was a stormy night, I had a good book. I was working with an observer in Wisconsin, logged into the telescope remotely from his home. He got to see the new year come in an hour before I did. When the new year came in, I received celebratory emails from my family in New Mexico and Missouri.

For us, stormy nights are an exercise in watching the weather. As I say, we want to be ready to take advantage of any clearing. Also, even if it doesn’t clear, I need to report the conditions to the highway department and fellow staff who will drive up the mountain the next day. I’m also on standby to respond to any weather-related emergencies at night. I’ve had nights at the observatory where the wind has knocked out power but the generators haven’t turned on. In that case, I need to investigate. We need the generators so we can stay in touch with remote observers and clear skies don’t care whether or not we have utility power. Also, though it’s not the most exciting aspect of my job, I’m also the guy who compiles usage statistics for the mountain during a night, which are then reported to our funding agencies.

At the end of the night, I shoveled the snow from around the door to the telescope where I was working, drove down to the main parking lot, then tromped through about four inches of snow to my dorm room. I woke up later on New Year’s afternoon to find that the road to the summit had been plowed and to see our supervisor of mountain operations using a front end loader to clear the roads on the mountain’s summit.

If we had been observing, we would have been taking images of Comet 46P/Wirtanen as it made its closest approach to the Earth. Essentially comets are dirty snowballs that provide a window into the conditions and materials available in the early solar system. Instead of watching a dirty snowball in space, we got to watch snow fall right here on Earth.

Stormy nights like the one we experienced on New Year’s Eve were part of the inspiration for the storms in my novel, The Astronomer’s Crypt. Of course, one of my jobs is to keep the bad things that happen in that novel from happening at Kitt Peak. You can learn more about the novel and watch a short trailer at: http://www.davidleesummers.com/Astronomers-Crypt.html.

…just went down! Courtesy of my publisher, the ebook edition of The Astronomer’s Crypt is being offered for the special price of 99 cents for the rest of the month. The ebook normally runs $4.99, so this is a remarkable 80% discount, which means it’s a great time to pick up a copy for your ereader. If you’re already a fan, consider gifting one to a friend! 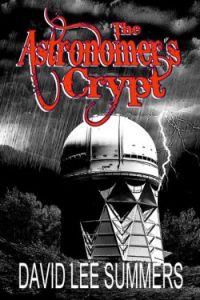 The Astronomer’s Crypt tells the story of astronomers, ghosts, drug dealers, and a monster from Apache legend colliding at a remote observatory during a violent thunderstorm. As followers of the web journal know, I’m an astronomer who operates telescopes at Kitt Peak National Observatory. The observatory is 56 miles southeast of Tucson, Arizona. The last ten miles of the drive up to the observatory are up a road that winds and twists its way up the mountain. Once you reach the summit, you find a virtual city consisting of twenty-two optical telescopes and two radio telescopes. Even so, after the sun goes down, many of the telescopes on the mountain are automated and some are only operated part time. It’s not unusual for there to be only a handful of people at the observatory at night. That all noted, Kitt Peak is both quite accessible and quite well staffed compared to some astronomical facilities where I’ve worked.

I have worked many nights in my career at observatories where I’ve been one of perhaps two or three people on a remote mountain site. It’s dark. The insides are the buildings are kept deliberately dim so your eyes can adjust if you need to go outside and evaluate sky conditions. In a wilderness situation, wild animals can and do make it inside the buildings. It’s so quiet, you hear every creak and groan of the building. You’re working late at night and you’re tired and not always thinking clearly. You’re trying to focus on the data you’re taking. It’s easy for a person in those conditions to imagine many scary things.

The Astronomer’s Crypt is a book made up of many of those dark imaginings, some of which are not far from the truth. Over the years, I’ve encountered unexpected people at observatories during the night. Fortunately, most have been cooperative and left when asked, but I have wondered what I’d do if I encountered truly bad people. I’ve been to observatories such as Lowell in Flagstaff, where there are real mausoleums on the site, where people who loved astronomy are interred. It’s not hard to imagine ghosts wandering around at those places. I’ve been through many terrible storms, sometimes with sheets of rain pushed by winds in excess of 70 miles per hour. On those nights, nature itself is terrifying. You can get a sense for how all of this combines in the novel by watching the trailer:

Two years before the events of this trailer, on a stormy night, in the dead of winter, Mike Teter experienced something that would change his life forever. Mike was a telescope operator at the world renowned Carson Peak Observatory in New Mexico. I won’t tell you what he saw that night on the mountain nor what happened afterward on a dark stretch of highway, because it would haunt you just as it has haunted Mike. But what I will tell you is that Mike is back at Carson Peak. And what he witnessed that night two years ago is about to become a reality…

You can pick up The Astronomer’s Crypt for just 99 cents at: