May 2020 is a month of numerous milestones and anniversaries for me. Today, May 19, I celebrate the thirtieth anniversary of my marriage to Kumie Wise. I’ve dedicated two of my novels to her. The first is The Pirates of Sufiro which celebrates its twenty-fifth anniversary this year and the second is Vampires of the Scarlet Order which celebrates its fifteenth anniversary this month. To commemorate both our anniversary and the anniversary of Vampires of the Scarlet Order, the dedication of which reads “To Kumie, enchantress of my heart forevermore,” I share this fun photo the two of us had taken at the Arizona Renaissance Fair circa 1994. In other milestones, my youngest daughter graduates from high school later this week.

The fifteenth anniversary of the release of Vampire of the Scarlet Order coincides nicely with the upcoming release of new editions of both that novel and it’s prequel, Dragon’s Fall: Rise of the Scarlet Order Vampires. I hired artist Chaz Kemp to create new covers for the novels. He’s turned in the cover for Dragon’s Fall and I’ll unveil that on Saturday. For those of you who don’t know Chaz’s work, I encourage you to learn more about him at https://www.chazkemp.com/

In working with Chaz, I’ve been thinking about the characters of Dragon’s Fall and how they’ve been portrayed by other artists. The “dragon” of Dragon’s Fall is a vampire named Desmond, Lord Draco. As a human, he was one of the Dragon Lords of Duke Ambrosius Aurelianus in Britain circa 570 AD. He’s sent to raid a Saxon village. Downed by a Saxon arrow, he falls prey to a vampire who has been following the Saxons. Not one to take such an attack lying down, Draco fights back. So doing, he manages to swallow some of the vampire’s blood and becomes a vampire himself. The Saxon vampire, Wolf, takes him under his wing. Wolf leads Draco and the other Dragon Lords on a quest for the one thing Wolf thinks can bring forgiveness to a vampire: the Holy Grail. As Draco nears the quest’s end, he learns he has the ability to transform into a beast, as many vampires can. In Draco’s case, the “beast” proves to be a swarm of flies. In the years after the hunt for the Holy Grail, Draco goes on to become one of the founding members of a band of vampire mercenaries called the Scarlet Order. Here we see Draco as imagined by Steven Gilberts. I like Steve’s vision except for one minor nitpick. He gave Draco a shave! Draco should have a beard.

Dragon’s Fall actually opens with the tale of a vampire even older than Draco. This is the vampire Alexandra. When I first started drafting Dragon’s Fall during a NaNoWriMo session, I started with Draco’s story. However, Lachesis Publishing came to me and asked for a series of five vampire novellas. To make the series work out, I added Alexandra’s origin story. I entitled the novella A Gorgon in Bondage, but given that Lachesis wanted to sell the novella as erotica, they shortened the title. Still, my longtime cover artist, Laura Givens gave me a nice version of Alexandra for the cover of the novella. This novella will appear as part of Dragon’s Fall under its original title.

The final vampire who helped to found the Scarlet Order is the mysterious Roquelaure. Roquelaure is a word from the French and it refers to a type of hooded, knee-length cloak that European men wore in the 18th and 19th centuries. The cloaks were named for the French marshal Antoine Gaston Jean Baptiste, Duc de Roquelaure. Roquelaure is also the nom de guerre of a mysterious vampire that I introduced in the story “Pat, Marcella, and the Kid” first published in 2002. Until the upcoming cover for the new edition of Dragon’s Fall, no artist has illustrated the mysterious Roquelaure, so it was fun to work with Chaz to imagine what he looks like. Be sure to return on Saturday to see Chaz’s version of these three characters who appear on the new edition of Dragon’s Fall: Rise of the Scarlet Order Vampires.

One of my birthday presents this year was Anne Rice’s latest Vampire Chronicle, Blood Communion. By my count this is her thirteenth vampire novel if we count both the official “Vampire Chronicles” and “The New Tales of the Vampires.” This is one of the few series I’ve made a point of keeping up with over the years. The first two books in the series, Interview with the Vampire and The Vampire Lestat were recommended to me by one of my co-workers at Kitt Peak National Observatory circa 1994. My co-worker used to refer to those of us who worked at night as the “vampires of the mountain” because you rarely saw us before sunset and after sunrise. I bought a boxed set of the first four novels and read them straight through, a little before Neil Jordan’s film of Interview with the Vampire was released.

Blood Communion is told in the voice of Lestat, who is now prince of the vampires living in his restored estate in France. In many ways, this is the tale of Lestat settling into his role as leader of the vampires. The biggest threat to that rule is an ancient vampire named Rhoshamandes who has shown himself to be a real danger in previous volumes of the series and now intimates violence against vampires and their allies he believes have done him wrong. Lestat wants to believe the best in Rhoshamandes, but must take action when the ancient vampire ups the ante. The problem is that it’s not altogether clear whether or not this is a battle Lestat can win.

Blood Communion is a thin volume in terms of page count. The hardcover is only 256 pages. Despite that, it addresses one of the more difficult subjects today, bullying and unchecked anger that turns into violence against one’s coworkers and friends. Without spoiling the novel’s plot, I think it’s fair to say that Rice’s answer is that such behavior can’t be allowed to continue unchallenged. On a lighter note, I enjoyed spending more time with other fictional friends from previous volumes such as Louis, Gabrielle, Marius, and Pandora. Also, the hardcover featured lovely illustrations by Mark Edward Geyer.

One interesting moment in the novel came when Lestat is presented with a Medusa ring. I don’t remember Medusa playing a role in the Vampire Chronicles before this. The ring’s significance isn’t really explained and I’d be interested to know more about its significance to Rice’s vampires. In my own novel, Dragon’s Fall: Rise of the Scarlet Order, the vampire Theron is fascinated by stories of Medusa. In particular he sees stories of her turning people to stone as being akin to his ability to subdue prey with the power of his mind. Also, he’s captivated by versions of the Medusa legend that portray her as so beautiful she made Athena jealous and it was Athena who turned her monstrous.

Interview with the Vampire was one of the novels that cultivated my interest in New Orleans. When my daughter went to Tulane University to study, it gave me an opportunity to know New Orleans and the state of Louisiana. While most of Blood Communion is set in France, I enjoyed the brief foray, Lestat took to visit a vampire in Louisiana.

Speaking of New Orleans, if you like the little Nosferatu next to the novel in the photo above, you can order them from Boutique du Vampyre in the French Quarter. Clicking the shop’s name will take you directly to the page. While you’re visiting the Boutique, you can also pick up a signed copy of Dragon’s Fall: Rise of the Scarlet Order as a gift for this holiday season. Clicking the book title will take you right there.

Perhaps one of the best pieces of writing advice I’ve heard is don’t chase trends. In other words, don’t write a genre just because it’s popular and you expect to make a quick sale or lots of cash. Odds are, you’ll be sorely disappointed.

By the same token, you should care a great deal about those subjects you do write about. After all you’re going to spend a lot of time with that subject writing, researching, and editing. If you have a measure of success, the book or story could be with you for some time after it’s written. You should be passionate about the subject.

I wrote my first vampire story in 2001 and I just sold my most recent vampire story this year, 2016. Vampires were popular when I started and continue to be popular. Even when my vampire novels reach relatively good sales ranks at Amazon, it’s not uncommon to see two or three hundred vampire novels with even better sales ranks. I think this shows both the popularity of the genre and explains why people at science fiction conventions often complain about how saturated the market is with vampire fiction. Of course, this is just another reason why passion is required. If you want to write a bestseller in a particular genre, it’s easiest to do so in a less popular genre than a more popular one!

So, why am I passionate about vampire stories? For me, they touch several themes near and dear to me. Growing up in urban Southern California, I was taught the night is a dangerous place with people lurking in shadows waiting to do me harm. I then went on to discover a love of astronomy and started spending a lot of time outdoors at night. I did learn to be careful and watchful at night, but I also learned that the night can be quiet and peaceful. Writing about vampires is like writing about kindred who are as passionate about the night as I am. I’ll note, the one time someone stole something from me, it was in broad daylight and I saw them coming. While I don’t fear the day, I can’t say it gives me more comfort than the night does.

What’s more, my dad died when I was young, forcing me to confront mortality head on early in life. There is admittedly a certain aspect of wish fulfillment in the idea of becoming a creature that circumvents death. However, living forever would come with costs. Among them, is the question of whether or not immortality is really all it’s cracked up to be and how one deals with hunting others to maintain an immortal existence. 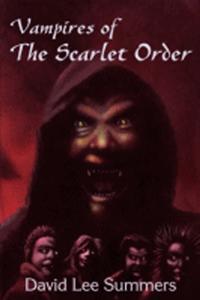 Writing about immortal vampires allows me to take a long view and write about people who get to see different periods of history and watch the world change. Of course, one of the consequences of being a vampire is that you can never really grow close to anyone other than a fellow vampire. Humans just grow old and die too quickly.

The website TVTropes.org has a very good page of suggestions for people who are interested in trying their hand at vampire fiction. One thing they discuss is that you should be genre savvy. This allows you to use and subvert tropes with knowledge of how others have approached the subject. Of course, this is another reason to be passionate about anything you wish to write about. If you’re doing it right, you’ll be spending a lot of time reading books and watching movies in the same genre you want to write. If you’re not passionate about it, that exercise will get old real fast.

If you’re passionate about vampires, or even just mildly curious, I hope you’ll spend some time getting to know some of my fictional friends in the following books: