In the novel A Princess of Mars by Edgar Rice Burroughs, John Carter escapes from Apaches in the Arizona desert by going into a mysterious cave where he succumbs to mysterious gasses. Soon afterward, his spirit is transported to Mars where he becomes substantial again and makes a new life as a warlord of Mars. It seems a very odd way of getting to Mars and one that’s probably doomed to failure if you or I were to try it. However, John Carter was not the first literary hero to get to Mars via this unusual method of transportation.

A Princess of Mars was first published in 1917. In 1889, the French astronomer Camille Flammarion published the novel Uranie (or Urania as it’s known in English). 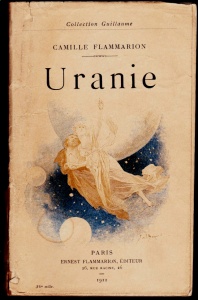 In mythology, Urania is the daughter of Zeus and Mnemosyne, the goddess of memory. She’s also the great granddaughter of Uranus, for whom the planet is named. Urania is the muse of astronomy. Camille Flammarion was, for all intents and purposes, the Neil deGrasse Tyson of the Victorian age. His popular works on astronomy inspired a generation around the world. In many ways, he was a true life astronomical muse.

The novel is told in three parts. In the first part, Urania takes Camille Flammarion on a journey to the stars. She shows him worlds orbiting other stars and the life inhabiting those worlds. He learns that life can come in many different forms. So far, this makes Uranie the oldest novel I know that imagines life on planets outside our solar system. In the second part of the novel, we meet one of Flammarion’s colleagues, George Spero, who is courting a woman from Norway named Icléa. George and Icléa have a long, intense courtship that includes discussions of the nature of thermodynamics, orbital mechanics, and the nature of death. Eventually they travel to Norway to get married. Before the ceremony, George decides to take a balloon to make measurements of the Aurora Borealis. At the last minute Icléa jumps in the balloon with him and off they go.

Alas, part way into the journey, the gas valve breaks and the balloon begins a rapid descent. In order to save George, Icléa jumps from the balloon to the frigid waters of the lake below. The balloon begins to rise and George is saved, but he’s unable to go on without Icléa and jumps out. He misses the lake and hits the ground and the two join each other in death. Sad for the loss of his friend, Flammarion goes to a séance. There he learns that George and Icléa have taken on new forms on the planet Mars. What’s more George is now a woman and Icléa is now a man! This brings us to the end of part two.

Part Three is a combination of essays about telepathy and other unexplained phenomena, how they could be, and a ghostly visit to Flammarion from George where we learn more about the couple’s new life on Mars. I won’t say much more, I’ve given spoilers enough. Still, I found it interesting that death on Earth and rebirth on Mars was not unique to Burroughs in early science fiction. I have no idea whether or not Burroughs was directly influenced by Flammarion, but Burroughs would have been a teenager when Uranie was released in the United States and Flammarion’s work was widely read. It was, after all, Camille Flammarion who inspired Percival Lowell to build an observatory in Arizona to study the planet Mars.

If you’d like to read this interesting, science fiction novel, it’s in the public domain in the United States and available to download from Project Gutenberg at: http://www.gutenberg.org/ebooks/41941.

I’m in the process of assembling a presentation for Wild Wild West Con in Tucson, Arizona that discusses the origins of terrifying aliens from space coming to invade the Earth. The presentation dovetails with the convention’s theme, “Cthulhu For President.” H.P. Lovecraft describes his most famous creation as, “a monster of vaguely anthropoid outline, but with an octopus-like head whose face was a mass of feelers, a scaly, rubbery-looking body, prodigious claws on hind and fore feet, and long, narrow wings behind.” During my research, I discovered that Cthulhu is part of a long line of terrifying monsters inspired by octopi and squids.

Personally, I’ve always found cephalopods fascinating and a little mysterious. Octopi often seem elusive when I visit aquariums and either hide or don’t give me very good photo ops. This is one of the best photos I’ve taken of an octopus at the Seattle Aquarium in 2008: 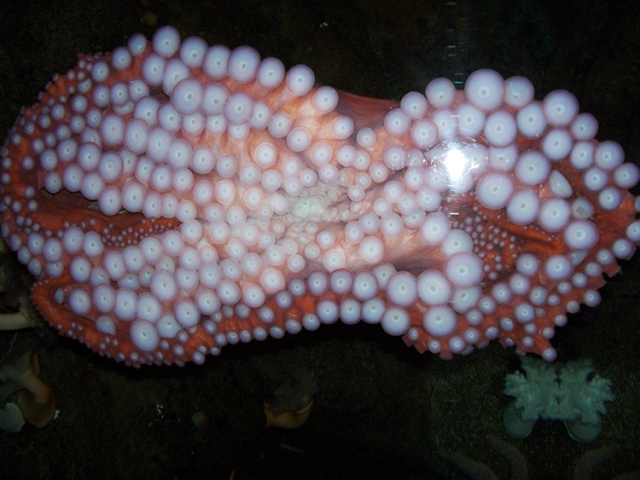 That said, when I invented the Alpha Centaurans for my novel The Pirates of Sufiro, I gave them tentacles to make them immediately distinct and “alien” as I was getting the action off the ground. When Captain Firebrandt from The Pirates of Sufiro returns in Kepler’s Cowboys, I wanted to give him a truly dangerous and frightening opponent in the water. The first thing that came to mind was a giant squid.

My octopus-inspired aliens and scary squid are really heirs to a science fiction trope that goes well back to the nineteenth century. For some reason, the Victorians found squids and octopi truly frightening. Camille Flammarion was, in many ways, the Neil deGrasse Tyson of his day. He wrote popular science books about astronomy and biology. He also wrote science fiction. In his book, Lumen, he imagines extraterrestrial beings from a star in the constellation Andromeda who live in water and must “keep their tentacles in unceasing motion.”

In The War of the Worlds, H.G. Wells described the Martians as having pulsating bodies, a beak-like mouth, and lank, tentacular appendages. Although Jules Verne tended to steer away from aliens in his fiction, one can make a case that he capitalized on the Victorian terror regarding cephalopods when he had a giant squid attack the Nautilus in 20,000 Leagues Under the Sea.

By all accounts, H.P. Lovecraft was an avid reader and would have been familiar with the works of Wells and Verne—and possibly Flammarion as well, who was widely translated and in circulation during Lovecraft’s youth. So, it’s really no surprise that in 1926 when Lovecraft created his most famous monster, he would invoke the image of the octopus to inspire terror in his readers.

When I created my tentacled alien for The Pirates of Sufiro, I gave it little conscious thought, but it’s clear I was being inspired by those early works as well. When I put Captain Firebrandt up against a giant squid, I knew Verne had inspired me. Whether conscious inspiration or not, it’s all enough to make me think twice the next time I order octopus sushi or calamari rings. I’d hate for our cephalopod overlords to be displeased!